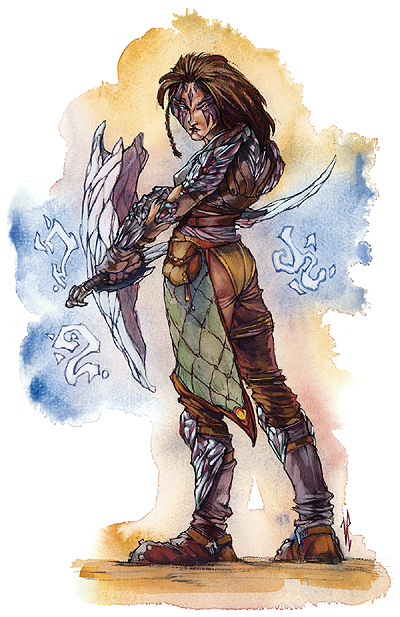 Every warrior has many weapons at his disposal. Few venture far without a trusty sword or axe, and the wise will keep a crossbow or a quiver full of arrows at their side. A concealed knife is a boon to any man at arms, and every soldier has his fists as a last resort. But there are some warriors who recognize that the greatest weapon any man can wield is the mind. Over ages, such men have learned to hone their mind alongside their body, and to fight with both at once. This school of combat, the Sleeping Goddess discipline, is not combat as many would think of it–rather than using physical force to overwhelm an opponent, the Sleeping Goddess discipline revolves around striking at the mind, not the body. A Sleeping Goddess adept strikes his deathblow not at the heart of his foe, but at the ideals and principles he devotes himself to, undermining his conceptual basis of reality.

Sleeping Goddess Maneuvers and Power Points The Sleeping Goddess discipline unlocks the power of the mind, allowing its adepts to tap into their psionic talent. You gain a reserve of power points equal to twice the number of Sleeping Goddess maneuvers, including stances, that you know. If you already have a power point pool, you add those points to it. If you do not have one already, then you gain a pool, and can take psionic feats, metapsionic feats, and psionic item creation feats. However, you do not gain the ability to manifest psionic powers, nor do you gain bonus power points unless you have levels in a manifester class.

Retrieved from "https://ageofwarriors.fandom.com/wiki/Sleeping_Goddess?oldid=3924"
Community content is available under CC-BY-SA unless otherwise noted.