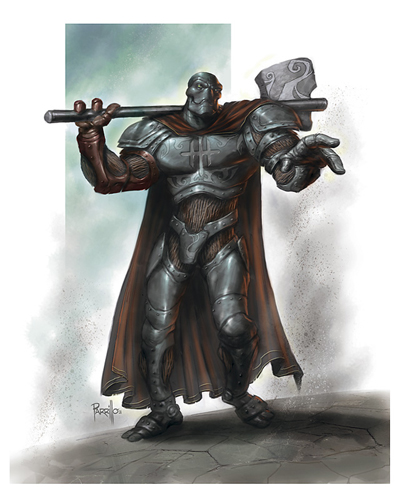 The inevitable known as Docens XII was indistinguishable from the previous eleven Docens before it. It was constructed for bringing those who defied their sacred oaths to justice, and armed with sufficient weaponry and knowledge to carry out its duty with extreme prejudice. What made it different from its predecessors was a matter of situation, not of construction. While on a mission to find a rogue sorcerer who had reneged on his pledge to serve as an exarch in the great game of the dragons, Docens XII was struck down by a powerful spell cast by the sorcerer, crippling him. As he was not dead, his essence would not reform in the creation creches of Mechanus, but he was unable to fulfill his duty. But, as the justice of the world would have it, a swordsmen found the crippled inevitable. The warrior was a martial adept, fleeing from the ruin of the Temple of the Nine Swords. Docens XII asked the warrior to kill him and then serve as his proxy in bringing the mage to justice, harrying him long enough for a Docens XIII to be created on Mechanus and finish the task. To that end, Docens XII taught the warrior everything he knew of fighting, teaching him every secret of the inevitables in regards to swordplay. The warrior delivered a coup de grace to Docens XII, and used his new found knowledge to hold his own against the sorcerer, until the newly-formed Docens XIII came to dispatch him. Eventually, this swordsman codified everything he had been taught by Docens XII, formalizing the techniques and devising a few of his own. Thus was born the Quicksilver Aegis discipline, born of law and order.

Because the Quicksilver Aegis discipline was never taught widely at the Temple of the Nine Swords or any similar center of training, most martial adepts do not know any maneuvers from it, or even know it exists.

Retrieved from "https://ageofwarriors.fandom.com/wiki/Quicksilver_Aegis?oldid=3898"
Community content is available under CC-BY-SA unless otherwise noted.