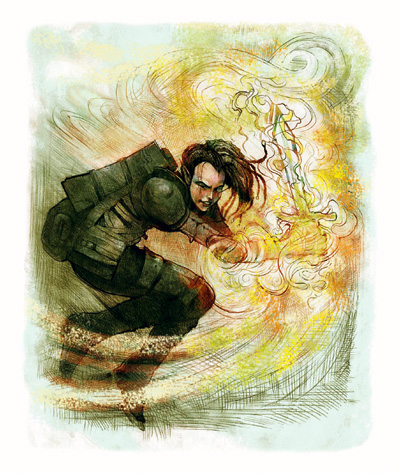 The Coin’s Edge discipline is a rarely practiced form of martial arts, one never taught at the Temple of Nine Swords, and thus never widely learned. The discipline was singlehandedly created by a single swordsman, a legendary master known as Uther Doul. Doul had studied ancient tomes of an esoteric form of magic known as probability magic, a mystic practice that allowed its followers to alter the flow of probability and chance, bringing things that might have been into reality. Doul was able to create what he called probability meditations, mantras a warrior could use to similarly bend probability without having to have any mastery of magic. Doul used his probability meditations to great effect. He was able to call up possible strikes, extremely accurate or damaging attacks that could have been, and bring them into reality, and to do the reverse–to force foes to use only the weakest of attacks. He eventually developed a codified martial discipline, which he called the Coin’s Edge school, relying on both these probability meditations and on a natural sense of chance, the gambler’s intuition that is key to Coin’s Edge maneuvers.

Retrieved from "https://ageofwarriors.fandom.com/wiki/Coin%27s_Edge?oldid=3953"
Community content is available under CC-BY-SA unless otherwise noted.