The school of the Sublime Way focuses on versatility and efficiency. Their students are taught to use many weapons, and to excel in the weapons most suited to their disciplines. Reshar believed strongly that a weapon must be usable in all situations and that a martial adept must use any weapon available.

As such, the 'soft' weapons were largely scorned by Reshar. Though masters of Setting Sun could put nunchaku to powerful use, and the spiked chain was a thing to be feared in the most skilled of Shadow Hand adepts, Reshar himself found that the weapons, though potent in the hands of a master, simply did not offer enough to warrant the special training necessary in their use. If warriors were to be efficient, choosing how to spend their time training is crucial - and time spent mastering such a complicated weapon was wasted, thought Reshar, for his vision of a martial adept was one who would not be dependent on any single weapon.

Alikarin ahn Tollerria, a friendly rival of Reshar's, disagreed with this decision. He felt, strongly, that the weapons offered opportunities that could not be found with in rigid weaponry, and that training specially in their use could offer rewards to a dedicated student.

In many ways, Alikarin did find that Reshar was correct - he spent many decades simply experimenting with the weapons, and never had the success of his friend. He drew few students, because he felt he himself was still a novice. Nevertheless, he persevered, and after many years, his small dojo, though obscure and remote, had succeeded, through the combined efforts of Alikarin and his students, in developing ways of using soft weapons not only with the techniques of the Sublime Way, but also with their own discipline: the Chthonic Serpent.

The ways of the Chthonic Serpent rely on throwing one's opponent off-guard, distracting him and ruining his timing, before finally trapping him within the binding chains of their weapons. 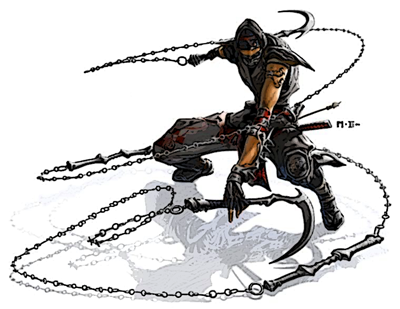 Retrieved from "https://ageofwarriors.fandom.com/wiki/Chthonic_Serpent?oldid=3941"
Community content is available under CC-BY-SA unless otherwise noted.